Welcome to our community of 2,000 pediatric hematology/oncology professionals

Founded in 1981, the American Society of Pediatric Hematology/Oncology (ASPHO) currently has 2,000 members. ASPHO offers a forum for the exchange of ideas on issues of special interests and concern to people in the specialty, as well as a means for facilitating communication among members. ASPHO is the only professional organization dedicated solely to the professional development and interest of subspecialists in pediatric hematology/oncology.

The Society works to actively advance programs and initiatives in professional education, scientific and clinical research, training, and practice issues. ASPHO represents pediatric hematologists/oncologists through active liaisons with numerous professional societies and alliances. Both ASPHO's conference and its journal, Pediatric Blood & Cancer, provide forums for presenting research to colleagues and peers. ASPHO welcomes members' involvement in volunteer activities such as standing committees, task forces, and contributions through member publications and other activities. You have the opportunity to make a difference in the profession through your personal involvement as an ASPHO member.

ASPHO is a multidisciplinary organization dedicated to promoting the optimal care of children, adolescents and young adults with blood disorders and cancer by advancing research, education, treatment, and professional practice.

ASPHO’s diversity statement affirms the Society’s values and welcoming of diverse and inclusive participation within the profession of pediatric hematology/oncology. In 2020, the Society published a statement condemning racism and supporting healthcare equity. Learn more about the Society's diversity, equity, and inclusion (DEI) efforts. 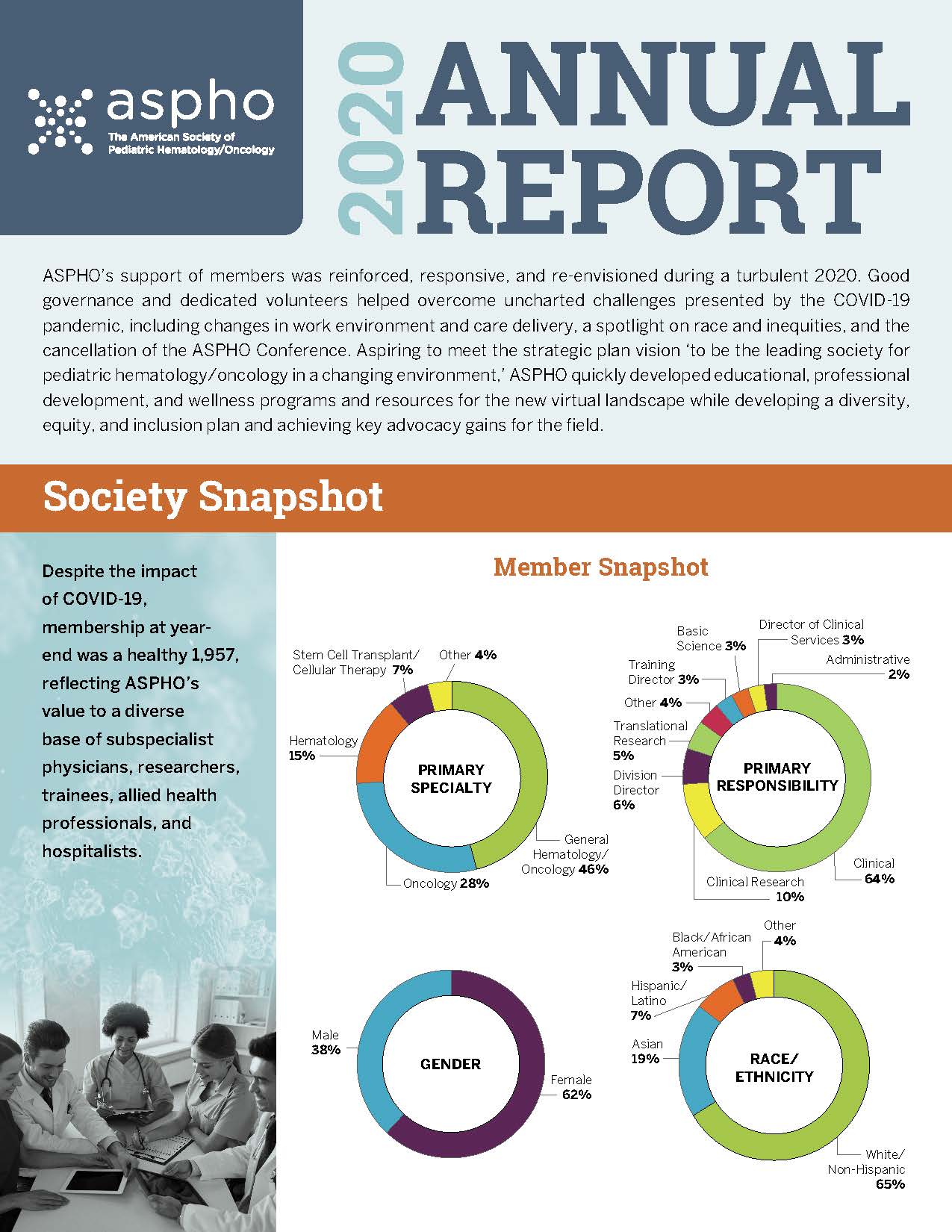 ASPHO's Board of Trustees consists of a president, vice-president/president-elect, immediate past president, secretary/treasurer, and six trustees at large. Learn more about your board members and how to get involved in leadership activities.

1979 The American Journal of Pediatric Hematology/Oncology is first published.

1982 The first gathering of Society members occurs after the Blood Club's symposium.

1987 Carl Pochedly conceives of the idea for a freestanding meeting of ASPHO.

1988 The first freestanding ASPHO meeting is held in Chicago.

1989 The American Society of Pediatric Hematology/Oncology (ASPHO) is incorporated in Illinois.

The first Review Course is held.

2004Pediatric Blood & Cancer debuts as the new journal for ASPHO and the International Society of Paediatric Oncology (SIOP).

2013 The International Membership category is established.

First year with sustained membership above 2,000